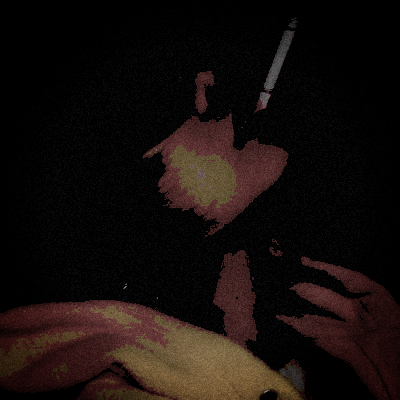 Nothing worth doing is as easy it as may seem at first.
~
"Follow your dreams" is meant to be taken literally; dreams act as guides and warnings.
~
White lies are still lies, and lying makes one ugly.
~
Beware of mistaking evil and stupidity for one another.
~
Utilitarianism – a misunderstanding of the meaning of suffering.
~
Relaxation is only relaxation if it's a goal in itself. If relaxation is a means, it's not relaxation.
~
Thinking much but walking little eventually produces ugly thoughts.
~
Joy and kindness makes beautiful.
~
Compassion has to be earned.
~
To hold a grudge is to be enslaved.
~
The most powerful mode of communication is via the aphorism that does not seek to justify itself.
~
Ask not for a smaller spirit, but for a larger life.
~
Are you Good, or are you just weak?
~
Always be kind to those close to you.

Only a corrupt God, a narcissistic woman or an evil ideology demands absolute devotion, absolute centrality, demands to be the world itself. And what becomes of the lover? Reduced to a slavelike state, his total devotion turns meaningless by the very fact that it is total.

A woman wishes to be a conflict; loved in the world, not as the world.

I sometimes get in my car and scream as loud and hard as I can to awaken Gotho-Scythian blood memory while blasting cheesy 80s J-pop in the background and driving way too fast through the fog.

Being in the gym for too long makes me sick. The smell of McPUFA™ Sweat, industrial chemicals from unceasing disinfection paranoia, unveiled lardmasses and bearded IPA drinking balding men, a fat mouthbreathing snapback wearing Mexican guy dousing himself in disinfectant as if it were Axe body spray (only to go home and chomp down on fifty Dorito burritos), along with the treadmill noise, I can't stand it for more than 45m.

We don't even need to go as far as to proclaim that ugliness is fear of physical death; it is enough to say that it stems from the fear of the potential of any sort of harm: social, physical, mental.

Minimalism – in many cases it stems from the fear of aesthetic harm, combatted through avoidance of potentially offensive visual elements, leading to something soulless and ultimately ugly. It should ideally be a way to enhance the already beautiful, and be applied only to a moderate extent, not as an ideology encompassing everything aesthetic and metaphysical.

Fear of social exclusion leading to rejection of one's own unique features; this affects women much more than men because social coherence matters more to them, and is manifested in the application of "foundation as a clean slate" makeup.

>Picture this: we're walking together at sunset on the Beach, me, a powerful man who never skips chest day and you a qt crippled autistic redhead. You trip but as you fall I reach out and catch you with one hand.

>You don't hit the ground but your breath still leaves you as you look up, eyes locked onto my powerful bosom. "Are you ok?" I ask, sweat glistening off my impeccable pectorals. You barely manage to stutter out a meek "yes" for you are very autistic and I am bountifully handsome.

Concepts to research: DIY networking, wireless ad hoc network. I envision bands of Aryan pirates roving around in chariots (i.e. vans) participating as nodes in a P2P network, anon location but verifiable identity; your van holds the data you care about spreading. Think about it.

Your van is your "website", and participants in the network automatically and periodically save a timestamped copy of your website when inside your proximity radius using a distributed hash table protocol (Kademlia, I2P) – extreme persistence and robustness. Think about it.

Poem by a friend of mine.

I believe that when u are fat, everything u say/think is underlaid by the fact that u are fat— any advice given or idea raised comes with the asterisk of obesity, signalling that u hate beauty and have made ur body a monument to ugliness, and are dying as a consequence.

Every time you save a photo of an e-girl and add it to her dedicated folder you lay a flower upon her digital shrine, decorating her cyber altar and as such effectively encoding her in binary code as a deity, a cyber goddess; every visit is a prayer, a beautiful act of worship.

some people's brains are like paper mache, completely dry from lack of cholesterol, or like styrofoam perhaps, making creaking sounds when they moves their heads, or like caramellized sugar perhaps—regardless, you can basically break small pieces off and throw them at bypassers

Man did not invent the wheel; God did.

Will man flail and fail to produce anything as revolutionary as the wheel, or fire, for 200 million years forthcoming? Man has not made himself worthy to be gifted fire by Prometheus risking his neck, courting divine persecution, or by the kin-eater Kronos.

Humans have never, ever discovered anything worth knowing without divine inspiration. All human knowledge, expertise, artistry stems from synthesis + development of truths intuited by those connected to God, granted mites of perplexing wisdom to be unfolded over millennia.

Midwit scientist fears this, topwit scientist knows it in his blood, thrives on it—paradigm shifts spurred when ∞-T breakaway kook begins entertaining verboten suspicion that visits in witching hours, wrestles it into a form that offends status quo just enough, but not too much.

Surprised to find "Will to Slavery" an uncoined term as it perfectly denotes the widely occurring drive to wilful surrender to authority of agency—the opposite of Nietzsche's "Will to Power".

memories spontaneously resurfacing: "she has bigger boobs than i do, is that why?" — "no no not at all it was complteltly meaningless" — "blablabla, bing bing wahoo, wah wah"; i am relieved, finally it's over, the dove of freedom has landed in my palm.

Some people are able to serve as nothing but a pool of yin to eject your yang into, they have nothing to sharpen yourself against, their entire purpose is simply to act as a polar opposite to conduct your discharge of masculine energy and memetic power.

There are impressions that completely bypass your mind and speak via your heart directly to your soul – among these are Bach's music, the sunset, and the touch of a beautiful woman; why these impressions touch us is a mystery, but it is in that very mystery we can find solace.

The assumption is that social media came to as an intentional creation based on the vision of engineers, but consider the inverse—the engineers serve as no more than a host of social media as an unintentionally brought to life parasite feeding on your dopamine. Do you understand?